The Age of Discovery started with Christopher Columbus arrival in the Americas, in 1492. This arrival opened the Caribbean & whole of South America to colonization by Spain, Portugal and France – and North America was opened to British occupation. Ironically this can also be called the Age of Slavery. Unlike North America, the South responded earlier with revolts and freedom-fighting against this universal slavery.

Simón Bolívar, who died in 1830, is a hero of South America’s struggle for freedom; he led Venezuela, Bolivia, Colombia, Ecuador, Peru and Panama to their independence & aided other South American states in their struggles too.

Bolivar belonged to one of the richest Spanish ruling aristocrat families of Venezuela, yet he fought against the idea of slavery and gathered the people around him to fight off the Spanish. Soon his Bolivarian spirit was joined with like-minded leaders across borders.

Simon Bolivar‘s dream was not just of making all South American states independent  -  but to unite the whole of Hispanic America into one united entity  - this was the only way South America would be able to repel  foreign intervention and slavery to imperial forces, he thought.  Sadly his comrades did not let his dream of a united South America become a reality.

At the same time when Bolivar and other South American leaders were struggling for their independence, the US issued the Monroe Doctrine (1823) which stated that further efforts by European nations to take control of any independent state in North or South America would be viewed as ‘the manifestation of an unfriendly disposition toward the United States’. This was precedence for the manifestation of the United States of America as the sole imperialist in the two Americas.

Soon after the yolk of Spanish colonial presence was thrown off, the US, which had emerged as a regional giant, penetrated it imperialistic claws into the politics of each South American state.  The methods were the usual - instating pro-US regimes through coups & bribes and imposing free-market economies securing US-interests, calling pro-US dictators democratic & defaming any democratic movement or leader that would threaten US interests, as fascist.

The Bolivarian spirit was revived in South America in the 1990s by Hugo Chávez of Venezuela, Lula da Silva of Brazil & Evo Morales of Bolivia – they rejected the "Washington consensus" & threw out US interests from their countries – this was called the Pink Tide. The three made a legacy and supported other South American states in fighting US political and economic interventionism. Between 1999 and 2008, leftist and center-left leaders took office in Venezuela, Chile, Brazil, Argentina, Uruguay, Bolivia, Ecuador, and Paraguay.

Hugo legacy of creating the Pink Tide is not a legacy of socialism alone but a legacy of uniting South America to make it strong enough to withstand foreign pressure and give their people a chance to live their own life in centuries. This universal ideal made Hugo a man of his people and an internationalist. 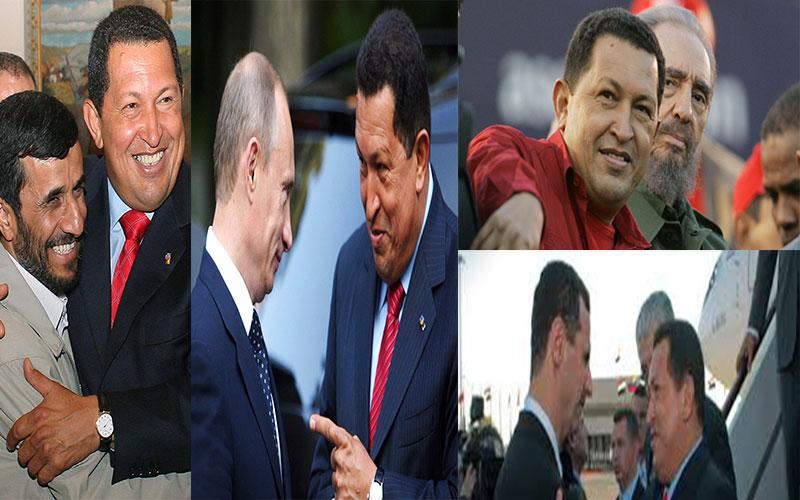 In 2009, Mark Weisbrot wrote in his Guardian article, ‘Argentina's economy grew more than 60% in six years and Venezuela's by 95%. These are enormous growth rates even taking into account these countries' prior recessions, and allowed for large reductions in poverty. Left governments have also taken greater control over their natural resources (Ecuador, Bolivia, Venezuela) and delivered on their promises to share the income from these resources with the poor’. 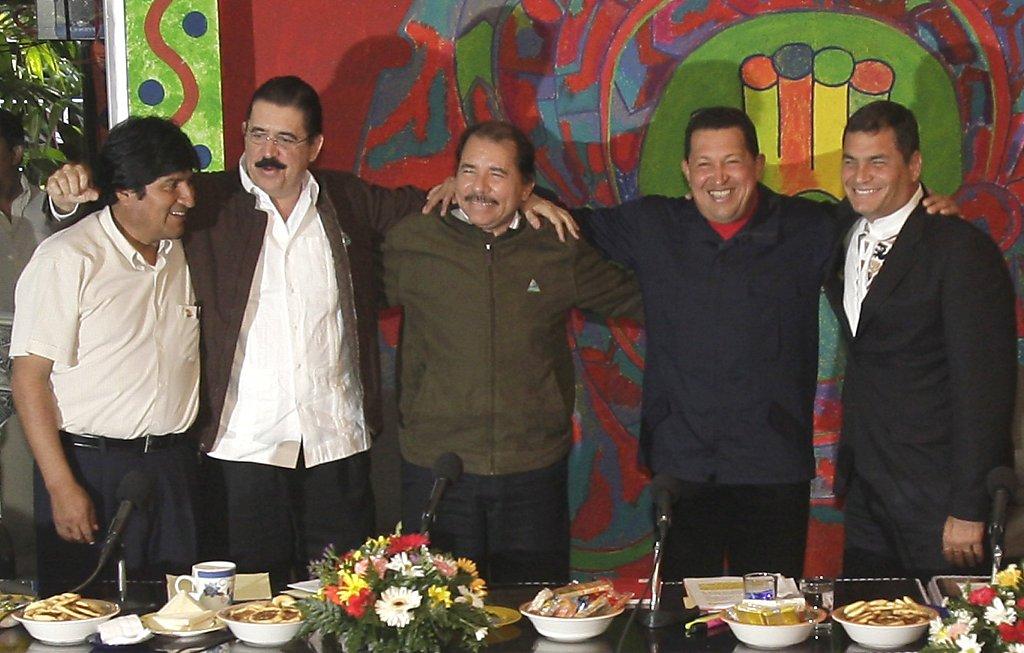 Today if you Google the term ‘pink tide’ you will find loads and loads of propaganda signifying the ‘receding of the Pink Tide’ and how the economic policies of Chavez and other socialist leaders of the past decade have actually destroyed the future of their people. For instance Chavez social policies are termed as an extravaganza based on the newly found oil-wealth in Venezuela and once the oil prices plunged in the global market, Chavez’s was left with no funds to drive his social programs. All this paints a meek picture of the Pink Tide, which is now seen as a weakly planned socialism that could not have had long-term effects and was fated to recede from its onset.

Socialist observers also deem the Pink Tide to be an incomplete and ineffective socialism. According to them the slogan of the Pink Tide leaders that attracted the masses was of anti-neoliberalism and a war against US-hegemony. The way to do it was import-substituting industrialization, which meant creating local industry and reducing reliance on the extractive and large-scale agro industries and by doing this the capitalist model would be defeated. But what actually happened was that although the government ousted foreign companies representing interests of US and its allies, the government itself had to heavily rely on the extractive and agro industries and could not create self-sustainable local economy. As a result the local capitalist oligarchy strengthened, this capitalist class always wanted to expand overseas into the US laps.

Certainly for a continent full of all such states that had gone through centuries of imperial and neo-imperial subjection, a couple of decades of faulty experimentation mean nothing. Surely the revolutionaries need more time, but sadly the United States’ lust for hegemony and economic control does not have so much patience. Even this much time has been a bitter struggle for the revolutionaries in surviving US led coups and covert warfare. And with the help of these soft-coups, one by one all these Left-regimes are being won over by the Right. According to a socialist magazine the hard coups have now changed into soft coups, ‘There is no doubt that the United States is maneuvering to take advantage of the crisis. In contrast to the 1970s and 1980s, its current efforts to reassert its dominance in the region are not primarily via military coups (with the exception of Honduras and Paraguay), but “soft coups.” Strategies of economic sabotage and shortages, alongside protracted propaganda campaigns and scandals in media and social networking sites are generating a climate of fear, desperation, and instability. All this is paving the way for the Right to deliver the final blow through institutional mechanisms like judiciaries, elections, and in the case of Venezuela a recall referendum that would cut short the presidency of Nicolás Maduro’.

In Argentina the 12years rule by the Kirchners has already been replaced by center-right Mauricio Marci, Ecuador’s Rafael Correa has announced that he will step aside at the end of his term as his approval ratings are sinking. In Bolivia, Evo Morales remains mired in a political-sexual scandal and has lost the referendum wherein he was seeking an approval for his 4th presidential term. Dilma Rousseff has been impeached by the Rightist oppositions in Brazil and in Venezuela the opposition is gearing up to impeach President Nicolás Maduro. So yes the Pink Tide is facing a death blow, and the economies of these states are in dire conditions – but this simply not the comparison to be made!

The legacy of Hugo Chavez, who is considered the mast-holder of Bolivarianism in South America, is not just of a communist ideal that is meant to create a utilitarian economy and the uplift of the lower class, it is an idea based on the spirit of freedom and the strength needed to sustain it. Economic growth and stability are crucial factors in judging a state but there are more crucial indicators that should not be understated. Freedom and control upon what is one’s own are very basic instincts of human nature and to forsake them for economic gains is not a virtue but a vice – yet the love for material fulfillment has made it the most cherish virtue of prevailing times. Perhaps Hugo’s slogan of ‘Chavismo’ should not be taken as a promise of economic prosperity in near future, but really as the power of taking one’s own fate in one’s own hands. Freedom and sovereignty do not necessarily promise material growth, although this growth may be a natural fruit of this power – but it must be understood that freedom is the goal in itself.

Humanity should give the people of South American who stood behind their leaders in this spirit of freedom, the most profound adulation and hope they have the courage to keep standing and also congratulate the leaders who affirmed the call for South American unity. If only this wave of Chavismo could be universal, the world would become a better place for the larger part of humanity.

The legacy of Hugo Chavez, who is considered the mast-holder of Bolivarianism in South America, is not just of a communist ideal that is meant to create a utilitarian economy and the uplift of the lower class, it is an idea based on the spirit of freedom and the strength needed to sustain it.